The reason? Eczema, a.k.a. “make me look like a crazed leper disease”

The medicine I have to get rid of it with is major sticky, so I only use it at night. Sometimes I.can’t.stand.the.itchiness. So I end up having to do this.
The worst case I ever had was actually a 2for. 1) a huge patch on my writing hand so all moisture was sucked out of my hand like one of those sucker fish on the side of a fish tank

What’s worse than that you ask? How about my entire forhead, my senior year of high school, while I’m a cheerleader. Yea. I wanted to peel off my entire face or wear a bag over my head until I died. 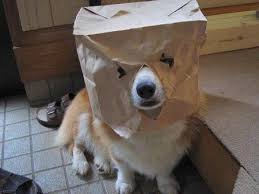 Let us not dwell on the negative though or at least the negative about me . I’ve been playing with my new camera since day one. I don’t have a lot of models for me though, so the kiddos Maggie and Pudgy have been the principal targets. Maggie has never been a fan of the camera. This new one isn’t any different.

The Pud-man on the other hand is usually a ham in front of the camera. I’ve started annoying him a bit too.

He’s still as curious as ever though, and his curiosity got the better of him after a while

Why just tonight, he supervised the re-design of the blog. [WHY AM I SO WEIRD ABOUT WHAT IT LOOKS LIKE? DIDN’T I JUST CHANGE IT???]