in a ‘business week’ but I have my reasons, and while one of those reasons is laziness it isn’t my top reason. I’ll give you a slight insight, but not to much since I’d prefer it if people stayed out of my insides.

I’ve been having really bad heartburn and indigestion, happening just about daily for MONTHS now so I finally bit the bullet and went to a doctor. Full on expecting to get a small piece of paper for heaven Nexium, I should have known not to get my hopes up. Thanks to my loathsome, atrocious, ghastly generous family medical history the doctor wants to make sure my issues are nothing more serious than a tiny pyro-obsessed demon living in my stomach with fireworks he’s smuggled from who knows where. First up was the abdominal CT scan. Remember my delicious banana snocone I referenced to in an earlier post? I promise this tasted nothing like it. I don’t even think a little pink umbrella would have made it better 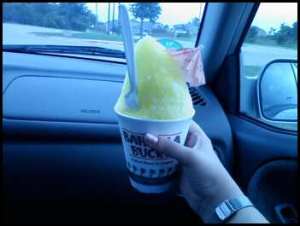 The entire thing was full when it started, but I couldn’t drink all of it. My body after about 700mL called it quits and I couldn’t even bribe myself to drink anymore of it (perhaps because I’m currently afraid to eat anything as it is due to the fact that I’ll be in heartburn hell later on). Continuing on, my name was finally called to go in to the room with the CT scanner x-ray thingy. After the nurse put the IV in my arm for the contrast, it felt like she was digging around in my vein for gold. I really almost cried, it was painful and it took a lot of work not to shout profanities at her. They took 3 ‘images’: the first before the contrast, the second right after the contrast was injected and the third was 5 minutes after the contrast was injected. She had warned me right before the contrast of the strange side effects I would feel including a bad taste in my throat, a feeling of warmness and LIKE I HAD JUST PEED MY PANTS. I kid you not she said that to me. It took me a minute to process to which then I had convinced myself this woman (the one with the degree who has done tons of these scans) had no idea what she was talking about. Pee my pants? Something besides peeing your pants could create this sensation? It couldn’t be possible. After the contrast was injected I felt the bad taste in my throat first, then the warmness so I was feeling good, absolutely no issue with feeling like I had just — WHAT THE HELL WAS THAT?!?

I kid you not, even though she mentioned I’d feel it, I was 1,000,000% sure that I had actually just peed all over the table. I just knew I’d be walking out of the office with my head down while the nurses behind me laughed and pointed at the girl who “actually peed herself” No worries though, it turns out I did not in fact do it, apparently its a side effect or something 😉 Overall it was an experience I’m not too interested in doing ever again so lets hope I stay as healthy as I’ve been someone who doesn’t have my family medical history. Thankfully through the entire ordeal I was able to listen to my iPod, which was good since I have the attention span of a squirrel and you have to be still during these kind of events.

On the note of iPods, my tiny 8G friend is full. I have 28.3 MG of room left on it and 214.2 MG of songs that I want to add to it. That doesn’t even include the 6 movies that constantly rotate on and off since I only have room for 2 at a time. I’d love the new Touch, but would prefer the iPod Classics 120G of storage space without the price tag of a Boeing 747. I am also not holding my breath crossing my fingers that Apple and Verizon partner together and come out with Verizon compatible iPhone next year. I’ve cleaned out songs on my little buddy, but my cleaning up usually boils down to me dancing around my room while listening to awesome songs (unfortunately not including anything by Mr. Astley, but I think he stole some of my dance moves).